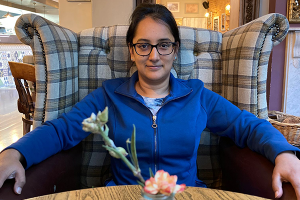 I am a neuroscientist and have a PhD in Molecular Neurobiology. I used to work as a researcher in a lab investigating causes of motor neurone disease at Imperial College London, UK. Towards the end of my contract in 2012, a few of us got together with the idea of wanting to share our research with more people through 'Meet the Researcher' and a little something we called Pint of Science. Pint of Science grew rapidly and I currently manage Pint of Science full time. I live in London, UK. 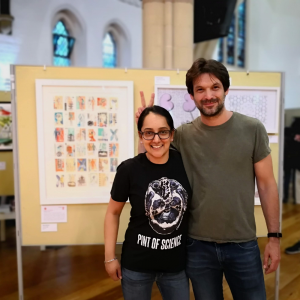 Praveen and Misha at the Cambridge Creative Reactions event 2019

How did we come up with the idea and why? Well, Michael (Misha) Motskin (co-founder) and I were working on neurodegenerative conditions at Imperial College London. We had recently run an event called 'Meet the Researcher' in which we invited people to our labs for a tour, showed them the latest discoveries and answered their questions. It was an eye-opener for everyone and we wanted to extend it to involve more people. I still remember the first conversation about the idea of Pint of Science. I was in the lab preparing some cells when Misha suggested running events in multiple cities at the same time. To be honest we didn't know why but thought it would be cool idea.

I always describe Pint of Science as an accident because we had no intention of setting up a science festival, hardly any event experience and little interest in science communication. It just goes to show that amazing things can happen when you take two unemployed postdocs and bring together a group of incredible people! Little did we know that we'd be running 45 events in three UK cities just a few months later and then 3000 events in 400 cities across the world last year!

I think it would have to be the first few years and setting it up at the beginning. We wanted to create something sustainable and build a good infrastructure but had a very steep learning curve and many challenges (including being unemployed). The challenges were partly because we didn't know what we were doing, but also because at the same time we were experiencing massive expansion and had very few resources and funding. It meant that something which would work one year didn't fit our needs the next year and we had to restructure or find more resources. I think it's only in the last year or so that Pint of Science has become manageable for me and not all-consuming (but now we've hit a pandemic, so that's another challenge!).

Pint of Science looks huge from the outside, and in some ways we are, but we really run on the minimum and I'm constantly changing hats which can be challenging; from talking to teams and sponsors to handling everyday queries from the public, calls asking to be put through to the finance department (ha ha it's just me and there is only one department!) and having  hundreds of Pint of Science t-shirts in my living room.

Working with so many different people can also be a challenge at times, but it's also quite enjoyable as they are inspiring and I always learn something. 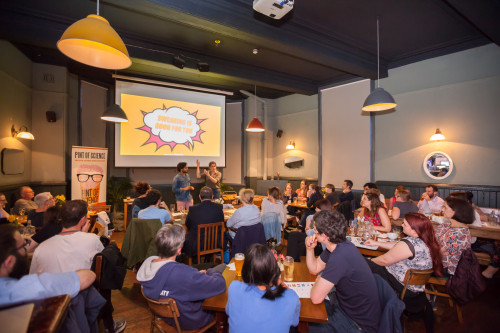 That's a tough one as there have been too many over the past 7 years! Ultimately I'm grateful to everyone who has ever been involved in Pint of Science, the entire experience and community that we have created moves me. People's ideas, enthusiasm, dedication and commitment are inspirational and beyond what I could have imagined and are a constant source of motivation.

It sounds silly, but I'm always pleasantly surprised and moved to see people turn up to events. I spend a lot of time behind a computer screen putting the pieces together and it's nice to see it all come together. During the festival I rarely stay in one place and see a whole event. However I have managed to see a couple in their entirety! The live link up to the International Space Station to talk to Commander Scott Kelly was amazing and sparked a personal interest in space. The first Creative Reactions event which was in Cambridge was also very moving, a simple idea had transformed into a spectacular art exhibition, I couldn't believe how much work people had put into it and the artwork was excellent.

I am also moved by seeing events and the excitement in other countries - though it has only been through social media! I have also had the pleasure of meeting people who have been involved in Pint of Science in other countries and their excitement, motivations, stories and experiences have been very touching.

There have been some funny moments. Last year at an event I sat down at a table with a random group of people who did not know each other (and they didn't know who I was). I had just said hello to the person next to me, who then asked: "Is this the first Pint of Science event you've been to? What do you think of Pint of Science?" That was both amusing and awkward at the same time! As mentioned I move between events and get a feel of what is happening. Most of the time I turn up unexpectedly and occasionally I have been unable to get in because 'your name's not on the list'.

I made this small video clip of my #pint19 experience when I managed to visit 16 venues in a few days (in the UK we had nearly 250 venues involved) and met lots of cool people and got a real taste of Pint of Science! I look forward to being able to do that again. (Music by Captain Batgirl, recorded live at a Pint of Science/Creative Reactions event in Reading.)

I enjoy anything related to psychology and people. Since starting Pint of Science I have developed an interest in space, I'm in awe of what humans are capable of doing. I would pair this with a cup of tea, but I won't say no to a Pimms on a hot day or some fizz or anything with lemon and lime in it!

I'm a board game geek ;-) and I'm a dab hand at Scrabble. I love doing pub quizzes and escape rooms. I enjoy escaping to the cinema and spending time in nature, forest bathing! 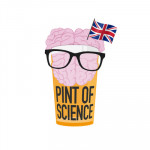 Pint of Science UK can be found at pintofscience.co.uk 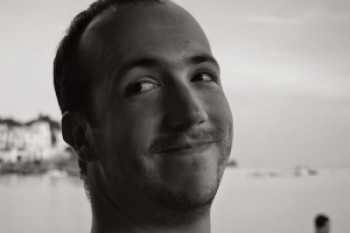