The Pint of Science festival aims to deliver interesting and relevant talks on the latest science research in an accessible format to the public – mainly across bars, pubs, cafes and other public spaces. We want to provide a platform which allows people to discuss research with the people who carry it out and no prior knowledge of the subject is required. We are a network of thousands of volunteers who are passionate about bringing discoveries to people and was established by a community of postgraduate and postdoctoral researchers in 2012.

The main festival takes place annually over three days in the month of May and simultaneously in hundreds of venues across the world. Each country holds their main events on the same days, bringing the scientific community together. Occasionally there will be one-off events throughout the year. Full list of countries can be found on our homepage.

In 2012 Dr Praveen Paul and Dr Michael Motskin were two research scientists at Imperial College London, UK. They started and organised an event called ‘Meet the Researchers’. It brought people affected by Parkinson’s, Alzheimer’s, motor neurone disease and multiple sclerosis into their labs to show them the kind of research they do. It was inspirational for both visitors and researchers. They thought if people want to come into labs to meet scientists, why not bring the scientists out to the people? And so Pint of Science was born. In May 2013 they held the first Pint of Science festival in just three UK cities. It quickly took off around the world and now happens in nearly 500 cities. 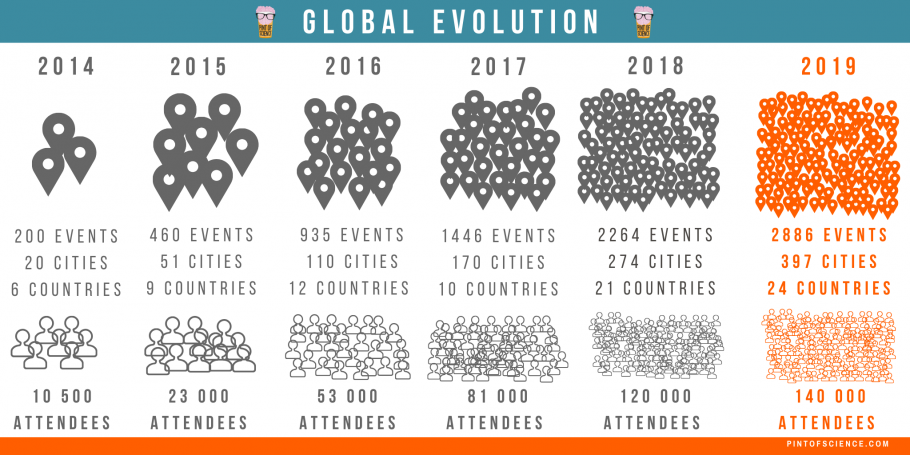